The objective of establishing huge fresh water reservoir for meeting demand of drinking, irrigation, domestic and industrial water supply. and its supplementary objective as a benefit from Kalpasar project is to reservoir use of top of the dam across the gulf as a surface transport link, potential development of fisheries, reclamation of saline land and project related to renewable energy. 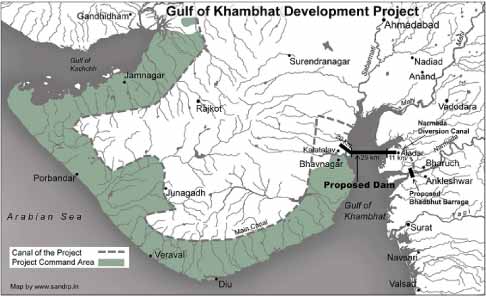 If the Kalpasar project complete than it becomes World’s Largest man made fresh water reservoir in the Sea.

‘Kalpasar’ means a lake that fulfills all the wishes. The word originating from  Hindu mythological ‘Kalpa Vriksha’ – wishing tree.

This grand scheme called Kalpasar is conceived and developed by utilizing the concepts of two most successfully implemented projects in the world.

The Idea of Kalpasar Project:

It details proposed 530 billion Kalpasar multipurpose dam project which is envisaged for construction across the Gulf of Khambhat.

In accordance with the Kalpasar project, a mega fresh water reservoir will be constructed on the upstream side of the dam by impounding the surplus waters of numerous rivers like Narmada, Dhadar, Mahi, Vatrak, Meshavo, Sabarmati, Bhogavo, Ghelo and Kalubhar.

The Kalpsar Yojana, if this project implemented with dedication and without corruption, will resolve four vital problems of the State of Gujarat which are water, electrical power, road-rail transport and development of ports.

The requirement of Kalpasar Project:

The western and south-western parts of Gujarat always remain uncertain for water availability for general purpose and for irrigation in the area. Further, the ground water around coastal area, which extends almost 60-70 % of the periphery of the state found not suitable for farming and also for general use.

The efforts for making water available in this region has been made by the construction of dams on rivers available in that part of the state. however, which did not suffice the quantum of water requirement largely due to poor monsoon.

The state of Gujarat being one of the most advanced industrial states in the country, the power requirement for nurturing these industries is also one of the major issues which need to be addressed for bringing prosperity to the state. Presently supply of power is being met by thermal power plants which is much below the total electricity requirement of the state.

In the Gulf of Khambhat, embraced by the Gujarat main land and the eastern coast of Saurashtra peninsula, yearly a volume of over 30,000 Mm3 of waters flows away before it can be used to mitigate the severe shortage of drinking and irrigation water in Gujarat, especially in the Saurashtra peninsula.

In the reservoir, the runoff from Sabarmati, Mahi, Dhadar and Narmada will be stored, together with the waters from the Saurashtra rivers discharging into the Gulf of Khambhat. The stored waters are to be used for irrigation, water supply and industrial requirements in the Saurashtra region.

The Kalpasar Project is considered the evident solution for solving on the short as well as on the long term the threatening drinking and irrigation water problems in Saurashtra.

Once the Gulf is closed, water levels within the reservoir can be controlled while the tidal fluctuation outside the reservoir continues and, hence, can be harnessed for the generation of tidal energy.

In addition to fresh water storage and tidal power generation, Kalpasar Project also aims at land reclamation, transportation improvements, and fisheries development. The details proposed 530 billion Kalpasar multipurpose dam project which is envisaged for construction across the Gulf of Khambhat.

In accordance with Kalpasar project, a mega fresh water reservoir will be constructed on the upstream side of the dam by impounding the surplus waters of numerous rivers.

The Kalpasar project, if implemented with dedication and without corruption, will resolve four vital problems of the State of Gujarat which are water, electrical power, road-rail transport and development of ports.

There is no suitable site of land in the State, available for the creation of river valley project to store surplus / untapped above 40% surface water.

In such a circumstance, the Gulf of Khambhat is an eligible option to create a reservoir by construction of a Gulf closure dam which can store about 10,000 million cubic meter water inflows of the rivers (Narmada, Dhadhar, Mahi, Sabarmati and some of the Saurashtra rivers), which accounts for 25% of total surface water resources of Gujarat.

Creation of this fresh water reservoir does not involve any land acquisition or rehabilitation of people and will serve as a life line of the Saurashtra region as well as an accelerator for the growing economic activities of Gujarat State.

The Gulf of Khambhat extends from north to south about 200 km and the width varies from 25 km at the inner end to 150 km at the outer mouth, covering an area of @ 17000 sq.km, of which only 2000 sq. km will be enclosed by constructing a dam across the Gulf between Bhavnagar and Dahej.

The Kalpsar Yojana Benefit in details:

Water supply for domestic use: 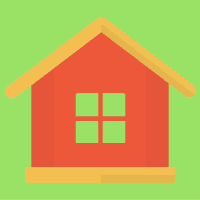 Studies have opined that the population growth would reach at a zero level by the year 2055 and the population projection for that year amounts to 36 million inhabitants in water deficit areas of the State.

Considering this the domestic and industrial water demand for the year 2055  has been estimated at 7,407 MLD or 2,700 million m3 per year.

It is planned that Kalpasar freshwater reservoir would provide 900 million m3 for domestic use. 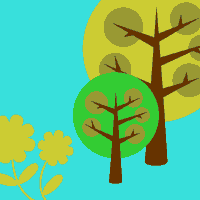 This volume has been reassessed in recent detailed studies at 12,248 million m3, which is practically equal to the average yearly inflows of surplus waters from the rivers falling in the Gulf of Khambhat.

5,891 million meter cube of freshwater will be available for irrigation.

10.54 lakh hectares of land is going to irrigate and about  1,19,000 hectares of saline land is also cultivate.

Water supply for industrial use: 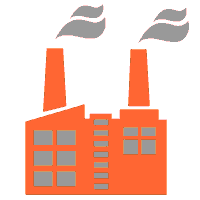 For industrialization, water becomes one of the most important resources, particularly in the water scarce areas such as North Gujarat, East Gujarat, and Kachchh, where other resources such as land, manpower etc. are also available in abundance.

500 million meter cube is provided for in the freshwater lake of Kalpasar for industrial use in the water scarce areas.

The demand for energy in Gujarat has been growing due to increasing industrial and agricultural activities. Kalpasar, therefore, would provide a renewable and environmentally sustainable power source in Gujarat that would spearhead the economic growth in the whole of the western region of the country.

The Kalpasar Project will produce 5,850 MW of pollution free power through a hydropower.

The Gulf of Khambhat is surrounded by extensive salinity affected soils, in an area of almost 400,000 ha in a belt of 20-30 km wide around Gulf with elevations below +10 m Mean Sea Level. Studies have revealed that it has been increasing at an alarming rate. In the past several attempts have been made to reclaim these soils for agricultural use.

But because of less availability of freshwater, it is not possible to use the land for agriculture.

119000 ha will be used for several purposes because of Kalpasar project. 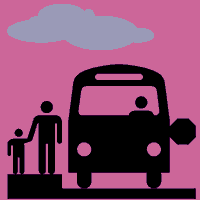 By connecting Saurashtra region with the East coast of Gujarat, transport distances will be reduced by 225 Kms and will result in the reduction of transport costs.

The Kalpasar project will serve as a tool for the reduction in distance between Dahej & Ghogha and provide sizeable relief to existing road network serving Saurashtra.  Thus saving hundreds of crores of rupees will be save which is used for fuels etc.

This would result in stimulation of the regional economic developments, reduced operating expenses, the existing highways would become less congested, increased comfort and convenience and saving of foreign exchange as consequences of the reduction of the fuel costs. 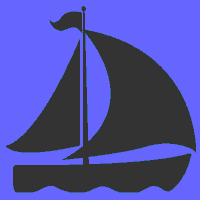 Kalpasar reservoir would provide an excellent facility of inland navigation, along Narmada river from sea to Hoshangabad (in Madhya Pradesh) throughKalpasar Lake. 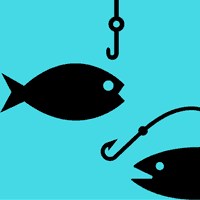 On implementation of Kalpasar project, the fisheries development will take place both in fresh as well as salt-water lakes. The Kalpasar project provides for infrastructure investment to support two large major Carps hatcheries.

It has been assessed that with an investment of Rs.1866.2 million and an annual recurring cost of Rs.208.22 million, the additional fish production of 9856 tons and additional income of Rs.685.22 million annually can be achieved. It has been estimated that a total of 55.21 million man-days of employment will be generated in fisheries activities.

Under the present conditions two ports are in use in the gulf of Khambhat area:

-The all weather direct berthing port of Bhavnagar.

In the case of the construction of the dam ‘upstream’ of Bhavnagar, the   impact on this port could be three-fold:

In Gujarat, the mining of water has increased tremendously due to the scarce surface water availability.  Hence the water table is going down and near the coastal areas, salt water intrusion is prominent at the rate of 1 km. per year.

This further results into salt deposition in the crust rendering that land infertile and useless for cultivation.

Kalpasar due to its fresh water reservoir will result into increase in the water table and charging of aquifers and hence ecosystem improvement will take place.  Salinity will be eradicated and fertility will be rendered to that land.

The Kalpasar Yojana gives a return of about 12 % per year.

Let’s discuss on The kalpsar project: