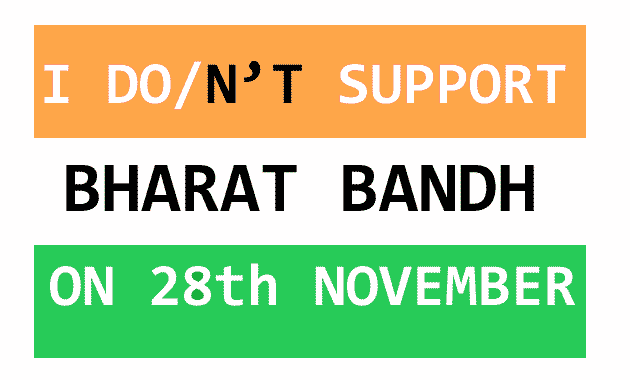 A nationwide protest of Oppositions against government decision of Demonetization to Bharat Bandh on 28th November, Monday.

The public in India especially in rural area, where no proper banking channel available or nonavailability of cash in those branches, faces many problems due to government moves on demonetization. Businessman and traders, shops sale are down during November also face many problems. hence opposition party are called the protest against the government.

After More than 200 MPs joined together to form a human chain in front of Mahatma Gandhi’s statue outside the Rajya Sabha against the decision of the government on demonetization. the opposition demanded that Prime Minister Narendra Modi should address the parliament in both houses on the issue of demonetization and name those who died due to demonetization.

A nationwide protest would mean more public inconvenience. Many people on social networking promoting their own opinion against ‘Bharat Band’ and stand with PM Narendra Modi and support Modi on Bharat bandh government decision. Some as follows

“I DON’T SUPPORT BHARAT BANDH ON 28TH NOVEMBER, because I am against the corruption black money and corrupt politicians, I support Demonetization, I am with Narendra Modi”

its seems like there are many supporters of Modi government and people are supporting them for demonetization decision. now it has to look that, is the protest of opposition on closed ALL India is succeed or not.

Are you Support Bharat Bandh on 28th November ? comment. . .