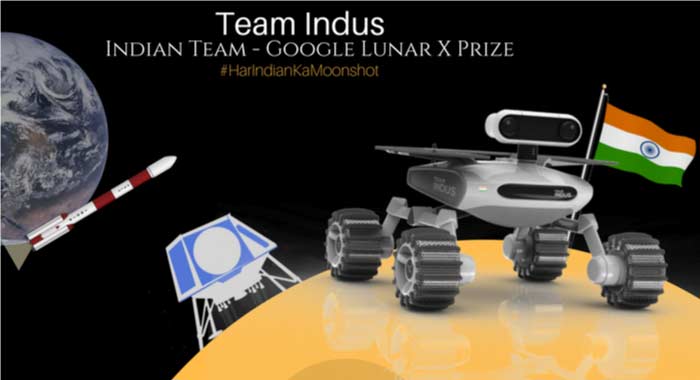 ISRO Made every Indian to proud after all its successful mission. now, it time to India proud on Private sector space industry expanding toward future.

Team Indus, an Indian aerospace startup and the only Indian team in the Google Lunar X PRIZE competition, is building a privately funded Spacecraft capable of landing on the Moon in 2017.

The Google Lunar XPRIZE Competition of $30 Milion Winning Prize, Awarded to First Team who successfully land rover on the moon surface, Travel 500 meter on the Moon and Transmitted HD Video and Images to Earth.

The Team Indus is a First Mover of Privat sector Space Industry of India give such spirit of innovation and adventure in science and technology in India.

A team of hundred making a dream of a nation

The Team Indus Rover name ECA (Ek Choti si ASHA) which created a Millions of new wish (Asha) in every Indian, every child for encouragement for science.

About The X Prize Foundation

XPRIZE Foundation is Non for Profit organization, mainly focus on Public Competitions to encourage technological development that could benefit mankind. XPRIZE Foundation founded in 1996 located at California, USA. Indian Ratan Tata is one of trustee of the Organization.

The $30M Google Lunar XPRIZE is an unprecedented competition to challenge and inspire engineers, entrepreneurs, and innovators from around the world to develop low-cost methods of robotic space exploration.

Team Indus is the only Indian team in the Google Lunar X PRIZE competition, is building a privately funded Spacecraft capable of soft landing on the Moon by 2017.

TeamIndus one of five teams remain in the competition and having secured verified launch contracts for 2017 to landing a robot on the surface of the Moon, traveling 500 meters over the lunar surface, and sending images and data back to the Earth.

Team Indus has already won a $1 million “milestone” prize for developing its own landing technology. It is now one of only five teams that signed confirmed launch contracts before a December 31, 2016 deadline.

A team of more than 100 techies–young engineers guided by a group of retired senior scientists from the Indian Space Research Organization (ISRO).

A team of nearly 85 engineers and 15 retired ISRO scientists based out of Bengaluru, Team Indus.

The Bangalore-based aerospace engineers under the startup Axiom Research Labs is the only Indian team in the final five competing to be the first privately-funded entity to moonshot as it readies itself for a monumental space mission later this year.

the total sum required is US$70 million and currently they’re in a process to raise another round of US$10 million.

Every Indian who contributes as little as 500 rupees ($7.25) will get his or her name etched on an aluminum cube that will ride to the moon on board the spacecraft.

Team Indus’s 8-kg, four-wheeled lunar rover. TeamIndus will also manage to land a small payload (the size of a can—about 250g) as part of its Lab2Moon project

Not just beautiful, but also smartly designed :). Our Skywalkers reveal the evolution of ECA – TeamIndus' Moon rover – from prototype to final version. #HarIndianKaMoonshot

The spacecraft are making will carry a 20-kg payload of which 10 kg will be allotted for commercial use, will be shot into lunar orbit atop a Polar Satellite Launch Vehicle

Team Indus is working on the fifth generation of its rover, Which the final Version will travel to the moon and it expected that by July 2017, it aims to have the fifth prototype of its lander ready.

The Journey of Team Indus

Their biggest challenge is that they have never built a Spacecraft before and as such have to learn everything while they are doing here from scratch. For a team which had absolutely no background in aerospace when they started off.

Given that they have to also focus on speed while keep costs low, they constantly monitor and ensure that this project is built using lean and frugal engineering methods.

The last day of the competition was 31 December 2010, and there wasn’t a single India team. Rahul Narayan and His Team Researched as much they could and they could and ended up registering on the very last day, December 31st 2010.

“A bunch of folks with absolutely no background in aerospace got into this programme to see how it plays out. It wasn’t a hollow bet, though, because we had to pay an upfront sum of $50,000 to register”- Rahul Narayan on how TeamIndus participated in the Google Lunar XPrize challenge.

TeamIndus made presentations to Isro around the end of 2012 and beginning of 2013, and “we were completely blown away with how receptive they were about our ideas”, Narayan recalls. 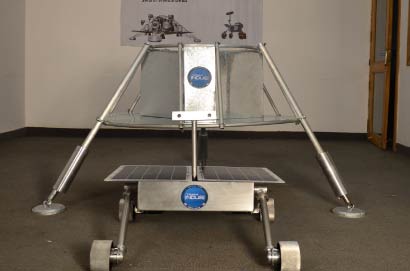 Build – 0.8 Versions Complete
Successfully completed building the terrestrial version of our rover “ECA 0.8” and lander “HHK 0.8” to end Q4 2012 on a high.

Apart from ECA, TeamIndus has announced that it will carry a robotic rover developed called HAKUTO.the Japanese team Hakuto’s rover on board our Spacecraft to the Moon. the Japanese team in the Google Lunar XPR

the Japanese team Hakuto’s rover on board our Spacecraft to the Moon in the Google Lunar XPR. 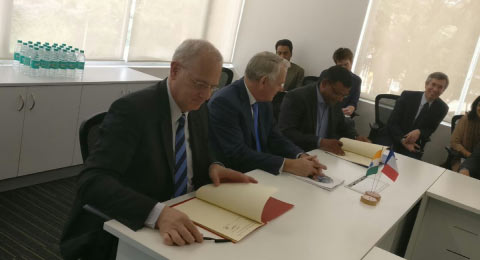 The Contract with France’s national space agency CNES will provide cameras systems to ride along on the rover to TeamIndus.

France is the global leader in the micro-camera technology that will equip sensors designed to aid TeamIndus’ rover’s progress by detecting ground obstacles in its path.
France’s cameras will help the Indian rover navigate the surface, looking out for rocks and other obstacles as the robot attempts to move 500m in order to win the $20 million Google Lunar XPRIZE grand prize.

The Team Indus is building a spacecraft to soft-land a rover on the moon by the end of this year and fly the Indian flag up there on the country’s Republic Day (January 26, 2018).

TeamIndus is using a PSLV for the mission. It will launch Spacecraft to Low-Earth Orbit after which The Team Indus take control and manoeuver it till touch-down. Team Indus signed launch contract with ISRO last year and have set the date 28 Dec, 2017 for launch.

The Craft carrying Tiranga, The Indian Nation Flage which Would be hoisted on 26 January 2017 on occasion of Indian Republic Day.

The spacecraft will be carrying the rover Hakuto of its Japanese co-contestant.

make a soft landing on January 26, 2018 i.e Next year Republic Day, Team Indus’ spacecraft will land on the Moon

If they succeed to operate and perform predefined tests for 14 days, they will claim Google Lunar X Prize worth $30 million.

Power India to The Moon

there’s no doubt that ISRO has achieved a lot over the years. India is developed and explore space mission in low cost at higher quality. we already  see that ISRO was not deterred by the fact that the $57 million Chandrayaan 1 lasted for 312 days despite a target of two years.

The Mars mission cost just $74 million. In May 2016 ISRO successfully launched a scale model of a reusable space shuttle; that project cost $15 million.

The Team Indus mission will be a powerful boost for robotic technology in India, which must move quickly up the value chain if it wants to create millions of jobs for its young population over the next decades.